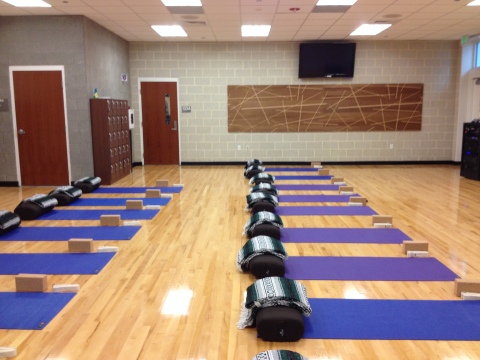 Forget saftey. Live where you fear to live. – Rumi

We have a new crossing guard at school. The old one was very friendly but he was also ambivialent, and I was never quite sure whether it was OK to keep driving or if a bunch of kids was going to jump out into the street in front of my car. This new guard is different. He is emphatic. He steps out into the crosswalk with his sign held high and his hand out. Stop, his entire body says. Yesterday, as he glared out at our line of cars and shepherded the children between sidewalks, I breathed a sigh of relief. I hadn’t realized how vigilant I had to be with the old guard, when it seemed as if no one was really in charge.

Teaching yoga is not natural for me. When I practice and go to someone else’s class, I plant myself solidly in the middle of the room so I am surrounded, anonymous, and invisible. Sitting in the front to teach is a bit terrifying and so far, it hasn’t gotten any easier. I love being told what to do, how to move, and when to breathe, but playing the role of leader is miles out of my comfort zone. “Breathe in,” I say when I teach, and am shocked when I hear people inhale.

On the weekends, when it’s just the boys and me, I sometimes catch myself waiting for the real grownup to arrive and take over. I have moments when I feel just as I did when we took Oliver home from the birth center where he was born. “They’re trusting us with him?” I kept asking Scott, who had the same panicked look on his face.

Lately, the new responsibilities in my life are overwhelming in a way that makes me feel kind of loser-ish. A few months ago, I expressed my leadership concerns to Rolf and he told me we are at our best when we are giving one hundred percent but still feel stretched. And this is how I feel every day: stretched and still falling short.

When Scott came home from Bahrain for three weeks this Christmas, I was so tired I could barely get out of bed for the first two days. I hadn’t realized how exhausted I was, how difficult it is for me to be in charge, whether it’s in the six yoga classes I teach or at home, as the solo parent. And yet, that is precisely my role right now: to be the responsible one. To be a shepherd of sorts, ferrying my crew from one pose to the next, trusting that right action will arise for all of us.

So many of my friends glide into leadership roles seamlessly. One owns her own law firm, another her own business, and on this Marine base, I am surrounded by some of the strongest and most together women I have ever met. It’s been humbling to realize how different I am and that what comes easily to them is elusive to me.

Rolf convinced me to help lead his 200 hour yoga teacher training here, on Camp Lejeune, which is he offering free of charge to veterans.  Most of the guys in the training also take my yoga classes, and this has raised the bar even higher for me. The 200 hour training meets once a month and Rolf dials in, appearing on the big TV screen in the yoga studio. But there in the room, I am the one in the front, the one being watched, not just in the training, but daily as I live and teach, succeeding and failing in various degrees. Like a butterfly pinned to a board, I feel exposed, and more than a little bit fragile, my own wings feeling dry and brittle.

And yet, stepping out of my comfort zone to this degree – doing what is so radically uncomfortable – has pushed me to take unusual steps. Knowing that I am being pushed in new directions has brought a new level of accountability to how I sequence my classes and to how I live. It’s so obvious to me now the areas in which I am out of alignment as a teacher, a parent, and as a person. I have had to take charge – and make changes – if not willingly, then by necessity, whether it’s encouraging my children through transitions as Scott leaves again for another five months or ushering students through a yoga class. Most of this is a two-step forward one-step back kind of thing. I feel a measure of success and then I lose patience, my sense of timing, or my nerve.

You are currently reading Responsible at Walking on My Hands.