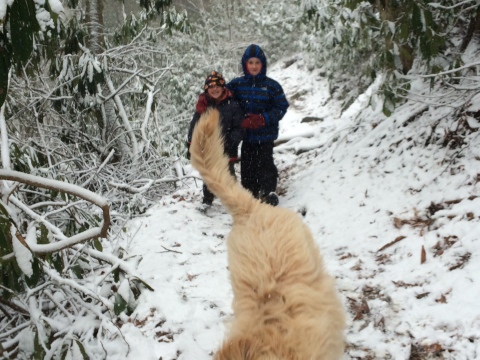 When it’s time to move on, there is no one to hold your hand. – Deb Talen, Ashes on Your Eyes

All I knew was that I couldn’t handle Thanksgiving this year. Fourth of July nearly did me in. It seemed as if every dad in the world was manning a grill or out in the driveway fixing something. One of my neighbors was in his garage blasting country music from his F150, and I felt oddly unprotected, even though I couldn’t identify the threat. The cicadas were whirring, the puppy was curled next to me, and the sun was reassuringly hot. Trying to keep things normal, we rode our bikes to the pool- that special summer domain ruled by stay at home moms and kids.

But even that was ruined with men. I sat on the edge of the pool with my sunglasses on while the boys jumped in. Nearby, a general’s wife was giggling and handing out paper cups of wine in a way that reminded me too much of high school. Later, the boys played with a neighbor on a slip and slide and then ran up the driveway with sparklers. The mosquitoes were fierce and I was panicky with a loneliness that was dark enough to feel dangerous. In my head, I mentally ticked off the holiday weekends that remained. Not Thanksgiving, I thought. There is no freaking way.

Last month, I booked a cabin in Boone, North Carolina for this weekend, an extravagant purchase that left me weak with relief. Until Tuesday night, that is, when I cursed my decision. After a busy week, I was finally throwing fleeces and underwear into a suitcase, trying to find large enough mittens and warm enough socks. My neighbor brought over snow pants and I was shocked to discover Oliver is big enough to wear my old hiking boots. Despite the fact that we were leaving, the same panic that haunted me in July was tugging at my ankles; the same creeping loneliness was draping its arms around my neck. I packed and cleaned until almost midnight and then loaded up the car with board games and down coats, suitcases and dog toys.

How foolish I was, thinking I could outrun a holiday.

Still, we got into the car Wednesday even though it was raining so hard, some cars were driving with their hazards on. After only a few miles, I was hunched over the steering wheel, wondering how this was all going to work.

By now, this is a familiar question, one I ask myself daily as I struggle with patience at bedtime or sit in the front of the room before a yoga class I am about to teach. So much of teaching is about being vulnerable, about walking into an empty space and hoping things are going to work out.

On Wednesday after I loaded the boys and the dog and the pretzels and the pears, we stopped at Starbucks. I had been too wiped out to make breakfast and the kitchen was too clean. We ran through the rain, and inside, the smell of coffee was a warm comfort. It was crowded and happy with that pre-holiday hopefulness, that maybe, this year, things would be better. I didn’t hear a woman calling my name until she grabbed my arm and said “Hey you!” It was Terri, a woman who works out at the gym the same time I teach yoga. She is small and wiry with spiky grey hair and eyes the color of sea glass. She was sitting with her friend Maria.

“Oh, these are your boys,” Maria said, touching my arm and smiling. “My girls are all coming home this year.”

“All four girls,” Terri added. “They live in New York. And oh my god – Maria is the best cook. Everything she makes.”

Maria smiled modestly and told me her husband was just home from deployment and that for the first time in a long time they would all be together. I felt her joy beginning to warm through my cold hands and feet.

“You have to try her carrot cake,” Terri said. “Oh my god, I will never eat carrot cake from anywhere else ever again.”

“Are you traveling?” Maria asked me and I said we were on our way.

“Is your husband here?” Terri asked and once again, I felt that shock that I am now part of this community, one that knows what it’s like to not know what will come next.

Last month, my neighbor was almost in tears because her husband was going on yet another training exercise to prepare for his deployment in August. “He’s going to miss Halloween for the fourth year in a row,” she said. “I’m so tired of this. I just want a normal life.”

“I know,” I said, and felt the familiar longing for predictability, agency, and home. Last week, Scott called and told me he just spoke to his detailer – the person who tells him what and where his next job will be. For five years we have been trying to get back to the west coast, and each time, we get farther away from my idea of home. I miss California so keenly, it feels like a phantom limb.

“Well, “ Scott had said. “It’s now between San Diego and one other place.”

“Oh jeez,” I said, because it’s always been between California and one other place. And we always go to that other place. “So San Diego or -?”

“Guam,” Scott said and inside, my mind said I can’t live in Guam. It will be a disaster. And then I remember that it will probably be fine. Because it’s always been fine, at least after a little while, anyway.

“We’ll find out soon,” he said. “I’m pushing for California.” But we both know it’s mostly out of our hands.

I told Terri Scott was in Bahrain and we were running away to Boone. Terri gave me a high-five. “You’re breaking the mold girl! Good for you.”

As we left the store, an older man with a rain-spattered Life is Good shirt held open the door for us and we stood under the outside awning, watching the rain bounce on the pavement.

I did not yet know what the day would bring. I had no idea that outside of Durham, I would drive through a soup of fog and truck spray and rain or that outside Charlotte, the skies would clear, revealing a ragged V of geese. I didn’t know I would stop for gas in a place so scary, it was like something from a Stephen King novel or that the flat land of eastern North Carolina would be so comforting: the low cotton fields and the leaning shacks; the plywood signs announcing boiled peanuts and sweet corn and “tomatos.” (They always forget the “e”). I didn’t yet know that our cabin would be snug and warm  and I didn’t know that Wags would be so scared of the stairs I would have to carry her up and down every time we took her out. I didn’t know that for the first time, I wouldn’t get lost, that we would find the hiking trail I read about online and that it would snow as if on cue. I hadn’t yet discovered that pumpkin pie and hot chocolate were the only Thanksgiving foods we would need and that all the things I thought were so important would turn out not to matter very much after all.

Then, I only saw that it was raining hard. I only hoped things were going to work out. I only knew I had been trying really hard to run away from things that are impossible to avoid. Thanksgiving, deployment, the unknown.

“No,” they both said, protesting loudly.

“OK,” I said, watching the rain slant sideways in the wind. “We’d better go.” I took their hands and we ran towards the car, towards the mountains, towards the day.

You are currently viewing the archives for November, 2014 at Walking on My Hands.