No matter how old, there must be cake.

The number forty is highly significant across all traditional faiths and esoteric philosophies. It symbolizes change – coming through a struggle and emerging on the other side more enlightened because of the experience. – Dr. Habib Sadeghi

Usually, I begin my yoga classes with child’s pose or a simple seated meditation, but really, meditation is too strong of a word. We breathe in. We breathe out. And inevitably, a Marine in the back of the class is trying so hard not to laugh out loud that he is silently shaking. Usually, I have to close my own eyes and press my lips together so that I don’t start laughing myself.

It’s always a bit awkward in the beginning when I’m asking them to come into cat cow pose and then downward facing dog. Some people are looking around and vigilance pulls up the chins of others. No one is breathing and you can feel the tension rising off bodies like steam.

Then I ask them to come into plank pose, and like magic, all the giggling stops. After about ten seconds in plank, the vibrations in the room begin to settle. After thirty seconds, the disparate streams of energy begin to gather. After a minute, the quiet comes down like a curtain falling.

I don’t have them hold plank to prove anything, or even to quiet the laughter. There is something so familiar about that pose for Marines and athletes – something almost comforting about being in a high push-up. And yet there is something else about plank that gets right to the heart of our own vulnerability. Maybe it’s that our pelvis wants to collapse in a way that would showcase our weakness. Maybe it’s that plank pose demands us to soften the space behind our hearts. Or maybe it’s the quiet of the pose itself, the stillness required to hold ourselves straight and stare at a single spot on the floor.

It was my birthday this week and I have been thinking an awful lot about vulnerability. 41 is a year that lacks the spunk of the thirties but also the dire nature of that four-oh milestone. 41 is not yet old but definitely no longer young. 41 is a bit like jumping into the shallow end of a freezing cold pool and hopping up and down, your arms over your head. 41 is about being in it but just barely. It’s about stopping by the mirror and knowing that you still look much the same as you did at 20, but undeniably, your skin is thinner and creased. What is left may look the same, but it’s only a veneer of who you used to be, and soon that will be gone too, and the true self – the real face that reveals our own creased and softened souls – will emerge.

Most of my fortieth year was spent on my back, staring up at the clouds that seemed to be rushing by too quickly. Last winter, I woke up in the cold sweat of panic attacks and during this past summer, I couldn’t sleep. 40 required waking up to the fact that I was living in a way that was not sustainable, that I couldn’t forego rest anymore in the name of getting things done, that I needed to stop saying yes when I meant no, and that I desperately wanted to stop asking for permission. Chocolate and wine were no longer staving off that terrifying feeling of fragility, and the warning hum underneath was becoming so loud I felt a little crazy. Last year, a line from Hamlet wove its way into my days: I could be bounded in a nutshell and count myself a king of infinite space, were it not that I have bad dreams.

For 39 years, what I wanted more than anything was to be tough. I would rather be angry later than vulnerable now. It’s easier to be the master of my own fate than to place it into someone else’s palm and close their fingers around those thin shards of glass. I had thought that toughness would scare the fear away. But it turns out that fear stays anyway and makes you want to giggle. It makes you want to yell or run or it wakes you up in the middle of the night and squeezes at your heart.

People talk about vulnerability now as this great thing and I suppose it is. But what they don’t often tell you is that one part of vulnerability is to take a good and honest look at yourself, which feels a bit like sticking your head into the mouth of a monster. Asking the questions is only one part of the equation. It’s sitting still with the answers that’s the kicker. There is the way that I think I am in the world, and then there is the way I actually am.

Sometimes I wonder how on earth I became certified to teach yoga. Of all the experiences in my life, teaching renders me the most vulnerable. It feels like taking off my skin. Before each class I feel like Hanuman, when he ripped open his chest to show Ram his devotion. Ram, Ram, Ram beat his heart.

I am working with Rolf Gates on my 500 hour teacher training, and in our last meeting via Skype I shared some of my challenges with teaching, mostly, that I don’t feel I am up to the task. Rolf laughed after I was finished and said,”Welcome to your first ten years teaching yoga,” which I found oddly comforting. He could have easily been saying, Welcome to your forties. And then he told me that teaching is like pointing at the moon. What’s important, he said, is that our students understand the moon.

About three years ago, I wrote that I felt as if I was on the precipice of something, but couldn’t see far enough down to know what it was. Now, I see that what I was gazing into was the mysterious space that houses our hearts. That my task is to simply crouch in the doorway and pay attention to the storm, to the call of the wind and the violent lashing of the branches. My job at 41 is to sit in the eye of the hurricane, rip open my heart, and listen. 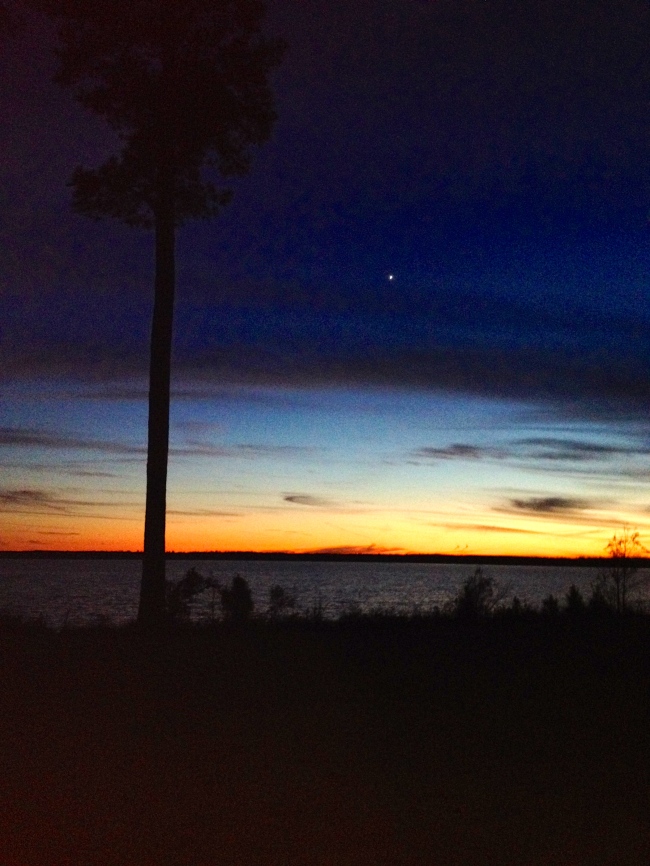 I always wonder what the world would be like if we all had the same intention, to focus more on love. I don’t know. It could be very awesome. – Britt Skrabanek

Ever since I was in college, I have gotten sick in November. In college, the day after cross-country season ended, I would come down with a sore throat, a cough, a stuffed nose. Last year, I had bronchitis. This year was mild. I caught a cold and lost my voice after I taught several yoga classes. For a week, I could only whisper. I could no longer yell upstairs to the boys to brush their teeth or stop fighting or to come down for dinner. Instead, I had to walk up the stairs and pantomime holding a fork up to my mouth or point to my throat and shrug. Most of the time, the boys acquiesced  and came down to dinner or resolved their arguments, usually upon Oliver’s lead.

I felt extraordinarily calm all week, which is rare for me. At the bus stop, I just stood with the boys and waved to the other mothers. When Gus came home from school, we played Uno or we went down to the bay across the street and found driftwood and shells, secret trails to the water, and animal footprints. During the evening, I walked out the back door and watched the sun as it fell into the water, leaving a wake of purple and grey and orange. Because I didn’t feel terrific, I went to bed early, and the time on my meditation cushion was easier, less fraught with all I wished I hadn’t said.  The week of the lost voice made me see how rarely I needed to speak, how much of what I usually say is just an extension of the chatter in my mind.

After several days, a haggard whisper came back and then a croak. The next Monday, after Gus came home from preschool, we were in his room putting away laundry and Legos. “Mommy,” he said, when I asked him to hand me some socks, “I am going to miss your lost voice when it’s back.”

When I told Scott he laughed. “You are loud,” he said. “I worry you don’t hear very well.”

After my voice came back, it was Thanksgiving, and then Christmas came after like a freight train. Oliver broke his leg and was miserable of course, his cast edging up to his thigh. He was unable to ride his bike or play soccer, and he and Gus began bickering in the afternoons. The holidays grabbed me around the ankles and tugged. There was so much to do, from Scott’s work parties to buying presents to spending 22 hours in the car driving to Pennsylvania and back.

This year, the holidays were loud.

On a Friday, right before the Solstice, I took Gus down to the water across the street at sunset, while Oliver stayed home with his crutches and a book. “Look Mommy,” Gus said and pointed to the sky, which was molten and darkening quickly. “It’s the wishing star.” We stood there, side by side, listening to the rat-a-tat-tat of artillery practice across the bay. A great blue heron flew out of a tree, stretched its wings over our heads, and echoed the staccato of gunfire with its own prehistoric squawk. For a moment, I felt as if there was no time, that it had ceased to exist or maybe just collapsed, all time layering itself upon itself, wringing out the important moments and ending up with a sunset.

After Christmas, I went through the usual foreboding prospect of choosing A Resolution. The lapsed Catholic in me still approaches events like this as if they were a kind of penance: a whipping strap with the hope of salvation attached. And then I read Britt’s blog about creating a Sankalpa instead. A Sankalpa is both an affirmation of our true spirit and a desire to remove the brambles which can prevent us from manifesting that deepest self. It is a nod to the fact that we are in a process of both being and becoming, it’s a rule to be followed before all other rules, a vow to adhere to our heart’s desire.

My heart’s desire is for more quiet. More sunsets. More silence. More conversations that mean something, that both press on the wound and ease the ache. More jokes and more laughter. More saying yes when I mean yes and no when I mean no. More eating sitting down. More walks on the beach, hunting for sea glass. More reading and more sleep.

When I think about it, my inability to be quiet is really an inability to be in a moment exactly as it is, to be with myself exactly how I am, to not shake my feelings around as if I am panning for gold, looking only for the good rocks, the ones that shine. Instead, my Sankalpa is to be quiet, to place the strainer down and plunge my hands into the cold and dusty water.

If you would like to continue the Sankalpa Britt suggested, I would love to hear about it in the comments.

You are currently viewing the archives for January, 2014 at Walking on My Hands.