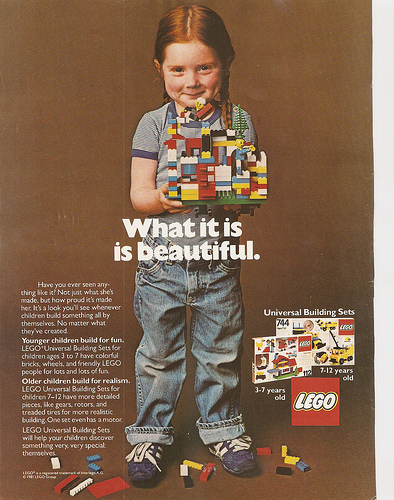 “Oh mother!” Beezus was all enthusiasm. “Just think. You’re going to be liberated!”
Ramona was pleased by the look of amusement that flickered across her mother’s face. “That remains to be seen,” said Mrs. Quimby. – from Ramona the Brave, by Beverly Cleary

I have two boys and we play a lot of Legos. What I love most about Legos is that they have a life of their own, that while they now come with instructions and in complete kits, they inevitably end up as something different altogether. Oliver recently designed and built two research ships, led by the genius Dr. Invention, and they search the Arctic Sea looking for sick and injured animals while also mining the ocean for potions that cure them.

What I don’t love about Legos is the sets they design for girls. They make me crazy. When I was little, we had a bin of Legos and I remember spending hours in my living room making boats with tiny rooms, spaceships, and little zoos. This was before Lego came out with people, so we even had to make those. I could have been the girl in the photo above with my red pig tails, rolled up Billy the Kid jeans, and Keds.

My sons always have enjoyed playing with girls more than boys, so we have a lot of little girls in our house, often playing Legos or some version of animal rescue or pretending they are cats. And the girls build things too, despite the fact that we don’t have Lego Friends sets, which the Campaign for a Commercial-Free Childhood described as, “so jam-packed with condescending stereotypes it would even make Barbie blush.”

Of course, I am not the only one who wants to strangle someone at Lego and the debate over gender-specific toys has been going on for years. A little over a year ago, Peggy Orenstein wrote a fantastic Op-Ed for the New York Times on this topic and she writes about it frequently on her blog. But lately, my hatred of Lego Friends and all things Barbie and Disney has deepened. I hate that little girls  seem to be running around in tutus and tiaras all the time. I hate that girls’ clothes so often have a ruffle or something sparkly. I hate when Oliver’s and Gus’ friends ask me if I want to play “princess.” No,” I want to say vehemently. “I don’t want to play princess. Why don’t we play CEO instead?”

Maybe it’s because I am growing closer to these girls or maybe it’s because they are growing up and I am deeply afraid for them. Let me be clear: this is not a post about parenting girls but about being a girl now, which I imagine to be excruciatingly difficult.

I was born in 1973, six months after Title IX was signed into law. And although my mother was about as traditional as it gets (she went to secretarial school and worked as a corporate secretary in Manhattan before marrying my father  and then leaving her job to be a stay-at-home), she was also a bit of a closet rebel and and quiet hippie, even though she would probably say this wasn’t true. Way before Michael Pollen began writing about food, my mom drove us to an orchard 20 minutes away to get local fruits and vegetables, I don’t remember her ever not being politically progressive and some mornings when I woke up, she was doing yoga moves while someone on TV named Joanie wore a white unitard and lifted her knee to her nose. We listened to a lot of Carole King and Simon and Garfunkel growing up, and for a while, we boycotted grapes.

More importantly, she was a feminist, although she might say this wasn’t true as well. “Anything boys can do, girls can do better,” was a mantra she frequently repeated. She signed me up for swim team when I was four, telling me – as she would for years to come – “If you can jump in that pool (or run that race or take that job) then you can do anything.”

Once, I came home from school when I was eight or nine and told my mom that I wanted to be a mother when I grew up and she laughed at me. “Oh you don’t want to be that,” she said, while zooming one of my brother’s Matchboxes back to him. “You’re going to grow up to do something much more important than that.” It’s a testament to my mother’s love and devotion that I didn’t interpret this to mean she didn’t want to be a mom, but rather, that I was destined for a better lot than she had, that I was supposed to do something in the world.

We were also lucky, because in the 70’s and 80’s we had the Women’s Movement. I still have images in my head of women in jeans and tee shirts  marching in Washington, carrying signs with the initials E.R.A. We had a force behind us, a maelstrom of protection and righteousness and passion for equality that spun around me and propelled me through an ocean of naysayers: girls can’t be doctors, girls can’t run as fast as boys, girls can’t build things. Those comments always lit a fire under me. Oh yeah, well just watch me.

I don’t think we have those women now and that makes me sad, both because I truly believe the Women’s Movement has completely stalled out and also because the girls who are eight and ten and twelve now are without the role models I once had. I am grateful for Hillary Clinton and Sheryl Sandberg (whose new book I have not yet read) and Oprah, but somehow the role models now lack the panache and passion of Geraldine Ferraro and Gloria Steinem.

I really loved Anne-Marie Slaughter’s essay, “Why Women Still Can’t Have It All,” and of course I’m not new to the table on this issue either. In fact I’m about eight months late. But I just love how she seems to describe my life and my choices (although at a much higher level), that perhaps if I wanted to I could have kept the corporate gig going through my kids’ childhood, but I just didn’t want it badly enough. As Slaughter says, I knew I was replaceable at work, but not so much at home. Sheryl Sandberg would probably say I should want it more, that I let women everywhere down by not trying harder, and maybe I have. Maybe this is even why the women’s movement is so stymied. Maybe we don’t want it badly enough anymore. Maybe we’re too comfortable.

Or maybe it’s because we blame each other too much. Maybe it’s because we don’t respect each other’s choices. Maybe we are too busy arguing about whether or not Ms. Slaughter or Ms. Sandberg is right that we are completely missing the bigger picture. A part of me thinks this isn’t what men would do. If men were the ones who wanted to be “liberated,” I have a feeling they would gang up, form a team, order a pizza and then call a lobbyist in Washington or someone on Wall Street who played hockey with someone else’s brother back in high school. They would see that what we truly need is affordable childcare, flexible work hours, job sharing, and the ability to telecommute. They would start a movement with funny YouTube videos, interviews with Jimmy Fallon, and free beer.

Or do I think that solely because they are already in power, and we, as women, are not?  And who is to say those ideas would even work? France, despite having affordable childcare and excellent healthcare is 57th on the 2012 Global Gender Gap Index, below Cuba and Uganda. (According to the World Economic Forum, the Global Gender Gap measures gender-based disparities based on: economic participation and opportunity, educational attainment, health and survival, and political empowerment).

As I read this report, the word empowerment struck me particularly. We as women are just not empowered. As soon as a woman CEO makes a controversial decision, she’s all over the media, critiqued not only for her ideas, but for her suit and her haircut. Perhaps most destructive though is that we don’t have each other’s backs. We’re constantly criticizing each other’s choices, parenting decisions, how often we show up to the PTO meetings or the the happy hours at work.

Finally, here at the end of my rant, you would probably expect some answers or at the very least, ideas, but I am all out. Frankly, I often feel like a sell-out, because I gave it “all” up to marry a guy in the Navy, an organization which does not exactly advocate equal rights for women. As a commanding officer’s wife, I am also the one who organizes meal trains, hosts baby showers, and wears heels when a senior officer comes to dinner or for an event. On these occasions, I am the one who cooks the dinner, or orders the salad, and tries to keep my mouth shut. It’s not very empowering, to be honest, and I have a deep sense of letting Gloria Steinem – and maybe my mother – down.

For a long time, I’ve felt that if we could organize – no, empower – military wives, we could change the world. Unfortunately, I’ve been too busy changing diapers and making pb&j’s and trying not to think about too much about what this says about me.

And perhaps that is what is what I am upset about, that I am culpable. That by making a choice that was right for me, I haven’t helped the girls who have come after me. Or maybe it’s the other way around and true liberation means doing what is right for oneself, no matter what it looks like.

You are currently reading Girls at Walking on My Hands.