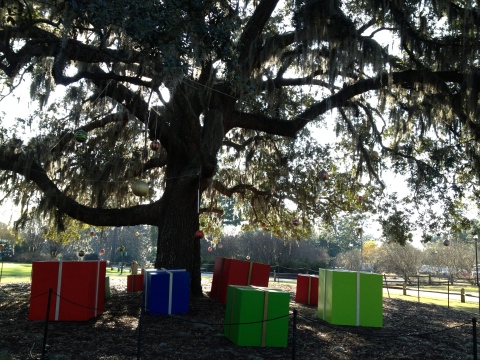 I have never been a big fan of Christmas although I wish I were. I wish I were the type of person to buy presents in October, like my neighbor or write lists in a little notebook, like my husband. Instead, I am the one who waits for someone else to bring home the tree and then finds a reason to be upstairs while the lights are hung. I ignore my mother when she tells me I need some greenery on the mantle and later pretend I don’t notice her walking through the side door with an armload of pine branches.

Sometimes, Christmas makes me lonely. Occasionally, it makes me feel greedy, and a little anxious as I wonder where we are going to put all the new Legos, the Erector set, the Matchbox cars that we stick in the bottom of the stockings. I worry that I don’t have the right sort of traditions, the same way I used to wonder why I could never get my hair to feather or find a boy who would want to take me to the Christmas dance. The holidays seem to be made of extremes: brilliance and shadow, joy and sorrow,  twinkling lights and the longest darkness. Last Friday’s news has made this year difficult for all of us, I think, even the most joyous. We’ve been knocked down by a certain type of grief, the kind that makes you want to fall to your knees and shove your fists into your mouth.

Yesterday, I took the boys down to the bay alone, without the other neighborhood kids. The sun was dropping quickly towards the water and the sky was heavy and low with rain. In front of us, a blue heron silently unfolded himself from a rock and beat his wings in a sure and steady rhythm. It was warm enough still for frogs, so we stood under a dripping tree for a few moments and listened to them.

On the way home, the light was so dim, I could barely see Oliver as he walked next to me, talking about Christmas traditions around the world, which he is studying now in first grade. He told me about the poinsettias from Mexico, the picnics in Australia, the way Jews everywhere light the eight candles of the menorah and remember their ancestors.

It was after five and the darkness was falling hard as it does in December, as it does every night, no matter how much we try to stop it. Time moves on, and eventually the menorah is snuffed out, the Christmas tree is hauled to the curb. It’s February or March and we are no longer hoping for snow. We turn on the news or talk to our neighbor and again learn that we humans can be more wretched than even the most horrible fictional monster.

And still. Nevertheless. I feel drawn to light a fire in that unfathomable space between my ribs, although I have no idea how to even begin. Maybe we are all hoping for a spark, striking whatever kindling we can find, fumbling foolishly in the dark for a candle or a match even as the sodden floor of our grief squanders our efforts.

After dinner last night the boys were too rambunctious, too high on Santa and red hats, the hope of a Pez dispenser this year. They asked me to make cookies and I said yes. I hunted down the cookie cutters and scraped off the Play-Doh. I melted molasses and butter on the stove and stirred in ginger and cloves, cinnamon and allspice.

I thought about what Oliver said about our ancestors and then I thought about mine. I wondered if my grandparents ever sat in front of a radio in Queens, their heads in their hands as they listened to news broadcast from so many of the wars they lived through. I thought about their grandparents who sailed to Ellis Island before the Irish Revolution and the ones before them who suffered the famine and the plagues, Oliver Cromwell and the Romans. I thought of the horrors they witnessed and the rituals they celebrated, and I wondered if maybe that’s the point of the holidays, if we keep them because they remind us how to move forward. Start by lighting the first candle. Begin by decorating the tree. Stop and watch the moon rise on the darkest night.

And so we continue. On the shortest day, we tell each other the light will return, even if we don’t quite believe it yet. We pound our anger into smooth rounds of dough, hoping the heat will transform it into something we can swallow. We consecrate the temple, laying our grief on the altar as if it were our most sacred offering. As incense wafts over the pews we make the sign of the cross and anoint ourselves with sadness. Dona nobis pacem, we sing, even though we might only be mouthing the words. Grant us peace.

You are currently reading Holiday at Walking on My Hands.