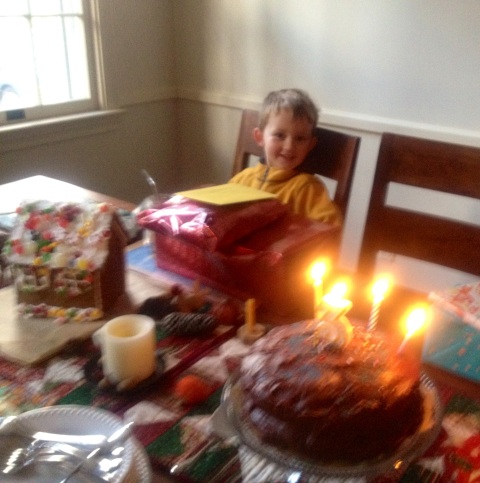 Gus with his gifts.

Lately, my life has proven this fear to be absurd. If 2011 was the year of anything, it was The Year of Gifts.

While I have gone through my life thinking I never win anything, this fall I won a $100 bill during a random drawing and a few weeks ago, the Fairy Hobmother granted me a $50 Amazon gift card. This afternoon, my neighbors brought over the biggest stuffed dog I have ever seen. It’s bigger than Oliver and Gus put together and is now sitting on the couch in the funny back room of our house that is neither a porch or a sunroom. My neighbors are older and I am guessing that they have forgotten what Christmas is like with small children, when your house is strewn with new plastic toys and you keep running out of batteries. A giant stuffed dog is the very last thing I need and yet, it fits in perfectly amid the excess and the clutter. To me, it’s a sign of all I have. When they brought it over I imagined the universe laughing at me. You think there’s not enough? Well then get a load of this!

Gus birthday is January 3rd and pretty much the last thing anyone wants to do on that day is eat cake. And still, there I was, cracking eggs into a mixing bowl and melting heavy cream and chocolate for the frosting. So much sweetness, I thought as I poured in the vanilla.

The night before I made the cake, my mom and I drove to my house from the Berkshires, where we spent a New Year’s together at Kripalu. Another gift, getting to spend the end of 2011 with both my teacher, Rolf Gates and my mother. “Your mom is like another you,” Rolf told me after he had lunch with her. “You guys are like Thing One and Thing Two.”

The other big gift of Kripalu was getting to meet Katrina Kenison in person. Not only do I admire and love her writing, but her first book, Mitten Strings for God, literally changed my life. I bought the book from a library book sale when Oliver was nine months old. We were living in Coronado, a small island off the coast of San Diego, and I remember the August afternoon I opened the book. It was warm and sunny and I was rocking in the blue denim glider, nursing Oliver. When Oliver was born, I was not really prepared to become a mother and even after nine months I was still surprised by my position in life. Katrina’s book was both a lighthouse for me and a map. She showed me another way to do things. Reading her book, I discovered that motherhood wasn’t something to achieve or plow my way through. On page 72, she writes, “To begin, we need only create a “listening” space, tune in to the world around us, and have faith that our own inner storytellers will guide us.” To me at the time, this was a revelation. That I even had an inner storyteller was news to me.

The second day we were at Kripalu, my mom woke up with a stomach bug. Although my mother will tell you I overreacted drastically and was preparing to LifeFlight her out of the Berkshires, I was a little worried. My mom never gets sick and on the handful of times in her life she has been sick, it’s been serious enough to warrant a visit to the ER. Vertigo. Inner ear infection. Strep throat. In our tiny cinderblock room at Kripalu, I followed the advice of WebMD and waved my finger back and forth in front of her face. “Really,” my mom said, rolling her eyes at me. “I’m pretty sure I didn’t just have a stroke.”

The previous night, in Rolf’s yoga class, he asked us, “Where in your life do you draw the line between good and bad? Right and wrong? Okay and not okay?” I thought of my own line, the thick black thread that grants a tiny space for Okay and an infinite depth for Not Okay. I thought of how my own body becomes a line sometimes, tense and rigid when things don’t go the way I want them to. “What if,” Rolf continued, “There was no line?”

On the night of January 3rd, after we were home, after Gus’ birthday cake was eaten and the candles blown out and the presents opened, I went out for a run. Usually, I am a morning runner, shuffling down the sidewalk before the sun comes up, but on Tuesday night, I was restless, sick to death of cake, and floating in a sea of Too Much. Sometimes, only a run will do, no matter that it’s bedtime and twenty-one degrees out.

I headed down my favorite route along Russell Road where the bright streetlights lead to the King Street Metro in Old Town Alexandria. On my way, I passed a creche that was still up and it was so beautiful that I stopped right there, my breath steaming in the frigid air. A baby was in the manger and two wooden figures covered with beautiful cloth were kneeling beside it. In the wind, the figures were rocking, almost as if they were weeping.

Because it is early January, I have been thinking about the birth of Jesus for weeks, but never once did I think of Mary going through the labor of birth. I never thought of her as having those searing contractions or going through the moment of transition, when the world heaves and rolls itself upside down. Standing there in the cold under three layers of lycra and fleece, I thought of the night Gus was born. I made Scott walk with me, up and down the bike path near our townhouse in Ventura. I had to keep stopping, and I leaned against the eucalyptus trees that lined the path and inhaled their scent. When my own transition came, five minutes after we got to the hospital, I thought for a moment that the reflection of the lights on the linoleum floor was really the night sky. “I can’t do it,” I told the nurse, “I want the drugs after all,” but she shook her head. “You’re doing it,” she said. “You’ve already done it.”

I have no resolution this year, only the usual questions and worries and wonders. The gifts I received in 2011 are piled too high for me to wish for anything for this year. My two boys. My husband. Our home. My friends who live everywhere and my loneliness in this city. My yoga practice and all the suffering that brought me to my mat in the first place. The joy and the pain. The light and the shadows, all of them gifts, equal in measure.

My wish for you in 2012 is that your year be filled with gifts. Even more, I wish that everything you receive be a gift, if not at first, then someday. “I always say that things will work out,” Rolf told me, “And that’s only because they always do.”

If you wish to be visited by the Fairy Hobmother, leave a comment here and she may bestow her gifts on you as well. And, I am giving my own gift of Mitten Strings for God to two people. If you read Mitten Strings for God, then I’ll send The Gift of an Ordinary Day. If you’ve read that, then I’ll send Meditations from the Mat (written by Katrina Kenison and Rolf Gates). And if you’ve read all of Katrina’s books, then you are a very lucky person.

You are currently reading Gifts at Walking on My Hands.