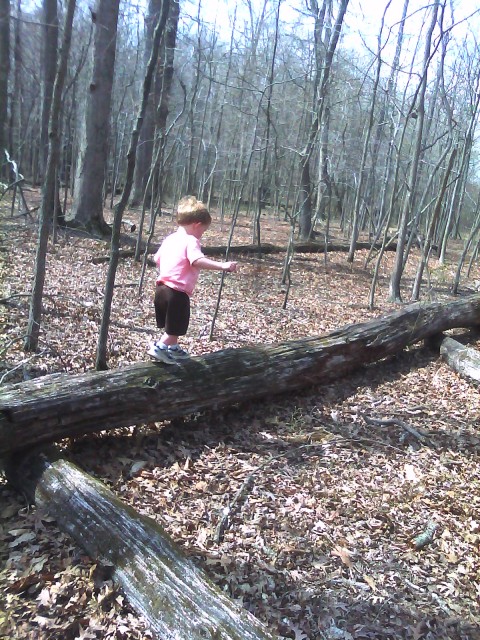 Gus, showing me how it's done at Huntley Meadows.

On the second day of my yoga teacher training last week, Rolf Gates asked, “How many of you had this fantasy that we would be doing a lot of yoga in here and maybe listen to me talk for a while?” I was taking notes when he said this and my head snapped up. Fantasy? What? What did he mean, fantasy? Wasn’t that how it was going to be for real? What was going on here?

Some of my friends have taken yoga teacher trainings. “It’s hard,” they say. “It’s pretty intense.” I thought they meant physically. I thought they meant they sweated a lot. I used to nod my head sympathetically at them, but inside, I couldn’t wait. Eight hours of yoga class? Excellent.

However, our first assignment is not to assist at a local studio or practice yoga for 3 hours a day. Instead we have been asked to read a script for a 90-minute yoga class out loud and tape ourselves on a voice recorder. Then we take our own class. And we should probably do this at least weekly until our next weekend training, which is about 5 weeks away. There was a collective wince that went through the room after we received these instructions. Ouch. Listen to our own voices? Do we have to?

The first time I read the script was a week ago. I had a babysitter but was so self-conscious that she or the kids might hear me practicing, that I drove to the library and read it out loud while sitting in my car. Unfortunately, the batteries in the voice recorder were kind of dead and when I went to take my own class, there was no sound except for a sentence that went something like, “Let’s move into tree pose. Place your right foot on the inside of your left thigh.” I cringed as I heard my own voice. Yikes. It was even worse than I thought.

On Friday night, I went down to the basement playroom with fresh batteries in the recorder and read the script out loud again. I thought I did fine. I didn’t need to listen to it though. I already knew what I needed to work on. This was silly. I wasn’t going to learn anything. So I put off taking my own class until last night. Finally, at 9:15 pm, I went downstairs in a pair of shorts and a tee shirt and stared down at the palm-sized digital recorder. OK, I thought. Fine. You win. My mat and block and strap and yoga pants were two stories above me in my bedroom, but I let them go. I knew if I went to get them I would never return. Instead, I sat down on the floor and pushed Play.

“Hello Everybody,” my voice said. Jesus Christ, I thought. This is horrible. (To get an idea of how much fun this was, call up your voice mail, and listen to your recorded message for the next hour and a half.) I sighed. I pushed back into downward facing dog because the voice on the recorder told me to. Suddenly, I was face to face with my knees, which is new, since I am usually in a pair of yoga pants. Holy crap! When did those wrinkles get there? Seriously?

Three minutes later I wanted to quit for good.It was like a bad meditation session, one that you wanted to end after 30 seconds, and if you managed to sit for 3 minutes, it was a victory. I looked at the voice recorder. I had an hour and 17 minutes left. Let me first start by saying that the script we have to read is in itself, a beautiful yoga class, even when it’s butchered by amateurs. Every muscle of your body gets attention and you finish feeling great, whether you have been doing yoga for one month or for 10 years. I know that it is a gift just to have it in my possession. To be able to take a class like that whenever I want to.

But last night, I did not feel great. My hands were slipping on the carpet. My voice was insanely annoying. I had gone out on a limb during the reading and decided to try to describe how to physically get into a pose, but when I followed my own instructions on the tape I fell over. I dreaded all the time in downward dog because it meant I just had to listen to myself. Stare at those knees. I didn’t want to breathe for 4 more breaths. I wanted arm balances and jump throughs. I wanted headstands and more chatarangas. Physical pain has always been my way out of emotional pain. When I used to run, I was never the most talented person on the starting line. I had hips that didn’t sit in their sockets correctly. My stride was too long. I had no finishing kick. But I subscribed to the Steve Prefontaine theory of competing: Anyone who was going to beat me would have to endure more pain than me. And I could endure a lot. I craved the pain. I knew it wouldn’t lead to salvation, but I thought that maybe someday, I might be redeemed.

I looked back at the voice recorder. 35 minutes to go. There was no redemption here. I felt myself bolting again. I needed some advice. I needed to talk to someone about this teacher training business. Why were they all lit up about this anyway? Why did everyone tell me how goddamned beautiful it all was. As soon as I was finished I was going to email Katrina and find out how she got through hers. She would give me some advice.

Then I remembered what she wrote on her blog, about her friend’s advice to her about her own teacher training which was, “It’s all about the love.” “Remember,” she wrote to me, “it’s all about the love.” I was in downward dog as I thought this and I looked back at my elephant knees. Was this what she meant? I felt the area under my sternum melt a little bit. I thought about how Pema Chodron says that meditation is about making friends with ourselves. I thought about how Sharon Salzberg says that the most beautiful part of meditation is when we notice we aren’t focusing on our breath and so we come back. We return home.

“Raise your right leg, er left leg,” I say on the voice recorder. I shake my head.  I definitely don’t love that I suck at this. I am not digging those knees or the way the reflection on the glass door shows my ribcage popping out. How does one actually go about making friends with oneself? How does one actually begin to love oneself?

After my “class,” I climbed into bed and read Karen Maezen Miller’s blog. As always, she reminded me to sit up straight and to get over myself. She wrote:

“We all have about three minutes when we’re just fascinated by our own emergence. Then our real face shows up, and it’s not so new after all. We stop finding ourselves remarkable, and then we can begin to do good for others.”

Do good for others. Isn’t that what we all want? Aren’t we all appalled by our own voice? Don’t we all feel like this? While I can never recall ever thinking that anyone’s voice was ever repulsive, don’t we all cringe when we hear ourselves on tape? Why does the sound of our own voice unnerve us so much? Why is it that it’s so difficult to like ourselves, to stop feeling ashamed about that time we lobbed a baseball at someone’s head when we were eight?

I have absolutely no idea. But I have an inkling that I need to at least figure out how to make friends with myself or I am never going to survive the next 5 weeks. Because this is where I usually get off. This is where I usually think: “This is NOT what I signed up for. Forget it. I changed my mind. Sayonara suckers.” And I can’t do that now because .. well. I don’t know. I just really, really like yoga. And I really, really like this teacher training.

When I was growing up, my heroes were Joanie Benoit and Mary Decker. Zola Budd and Grete Waitz. I remember an interview with Joan Benoit back in the 80’s. The reporter asked what her strategy was for the marathon she had just finished. Joan was still breathing hard from her race and she shook her head and laughed. “I just told myself to find my place in the pack, find my pace, and get comfortable there.”

I have a big metaphorical box where I lock up what I am not comfortable with: that I am a bad listener, that I talk really fast, that I don’t really like other people’s children. The wrinkles go into that box and the number on the scale. The terrible things I said 10 years ago and 10 weeks ago go in there too. I somehow think that if I keep everything locked up,  when my parallel universe finally gets here – you know, the one where you are tan and perfect and always nice – I can just chuck that box into the ocean. But that parallel universe is never going to get here, is it? Maybe it’s time to unlock the box.

You are currently reading Compassion at Walking on My Hands.