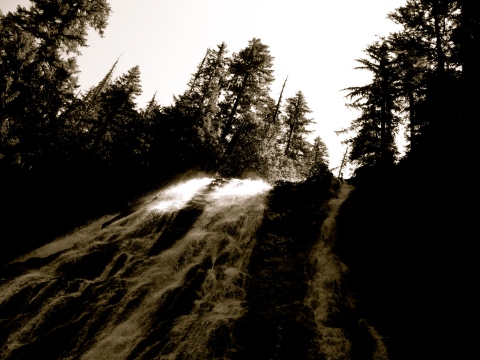 I love this whole blog space. There is so much love and wisdom here. There are also free things, which I didn’t see coming. On Alana’s beautiful blog, “Life After Benjamin,” I won a cool parenting book (yay!) without even knowing I was in a contest. And Bruce, from Privilege of Parenting has been giving me free therapy for a while now in the form of insightful comments on my posts. I was born in the early 70’s, and for my generation, therapy in our twenties was pretty much de rigueur. We grew up in some interesting times (Tailhook! The Challenger! Geraldine Ferraro!). But that is another post entirely.

Bruce’s brand of therapy totally eclipses the “how do you feel” therapy of the 90’s and instead, focuses on the Soul, capital S. On a recent post I wrote about my almost debilitating fear of raccoons. Bruce replied that the raccoon might represent my Shadow Self, that if I listen quietly, that masked animal might be able to tell me the wishes of my deepest self, that the Shadow Self (my raccoon) is a creature “of the transitional time between darkness and light. Jung talks about the importance of “living our animal” and that seems to be on your plate…”

Suddenly, Bruce’s words helped me to understand the concept of Jung’s shadow self more than anything else I had studied. I tried reading books on the shadow by Debbie Ford and Marianne Williamson and Deepak Chopra, even Carl Jung himself, but they all left me confused. Why should I embrace my shadow? Why should I love it? Shouldn’t I just try to change all of the things I don’t like about myself?

However, when I thought of my shadow self as a raccoon – scrappy, clever, tenacious, aggressive – I felt a bit differently about all of these qualities that I usually try to hide and cover up. Live our animal. Perhaps, like Bruce said, the qualities I try to keep in the dark aren’t meant to be hidden. Maybe, if I expose them to light, they might even serve as guideposts. Maybe it was time to step out of the darkness and into the shadows.

After all, what is early spring if not a time of shadows? You breathe huge sighs of relief during a warm day and then you get sucker-punched with a snow storm. The buds are visible on trees but stay closed, tight-fisted and adamant in their refusal to unfurl and awaken. The flowers try to break through the soil, but it seems to take forever. It’s all just a waiting game, demanding huge heaps of patience.

Last weekend, on my way to yet another insane trail race, I sipped my Earl Grey and turned on NPR. Krista Tippett’s “On Being” was on and she was interviewing Seane Corn, the famous yoga teacher. At first I was dubious. After Rodney Yee had an affair and left his wife and kids for another yoga teacher, I have not been big on yoga celebrities. So I know nothing about Seane Corn except she started a pretty cool program called “Off the Mat and Into the World.”

I kept listening, and what did Seane Corn talk about? You guessed it: the Shadow Self. I can’t do it justice in a blog, so I highly advise you to download the podcast (free!) and give it a whirl. Seane spoke about the fact that she is an unlikely yoga teacher. She came from a blue-collar family. She is not well-educated. She was molested as a young child. But for her, yoga was a way out of the pain. It was a way into the light and a way to guide others into that light as well. What  struck me the most was when she said that we don’t have a good life in spite of our Shadow Self, but because of it. Seane said that she is grateful now for the abuse and shame and suffering she went through because the darkness was transformative.

I found that level of gratitude amazing. I have always thought that rough times are to be endured, not  exalted. I have always thought that we are who we are in spite of our Shadow, not because of it. George Sheehan, who wrote beautiful books on running maintained that he was his best self when he was a good animal. Live our animal. Anima: the archetype of the unconscious mind.

Is there an animal the represents your Shadow Self?  If so, is it trying to tell you something? What discoveries await in your own Shadow? I would love to continue the discussion!

You are currently reading Shadows at Walking on My Hands.