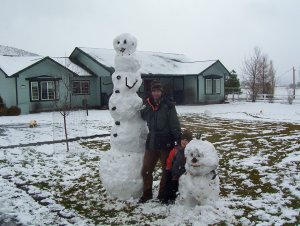 Scott and Oliver in Oregon with their Snow People

Last Sunday I woke up really early and decided to go for a run before the sun came up. (This is not typical). After I came home and showered, I still had about 20 minutes before the boys woke, and I crawled back into bed (the bliss of these 20 minutes tells me I need to do this every day). I lay there, warm and cozy again, and thought of a conversation I had with my dad recently about Thomas Moore’s book, Care of the Soul. It had been ages since I read the book, but its title always resonated with me.

Care of the soul. Watering the plants. Feeding the animals. Mucking the stalls. Bringing the snacks. Each of these is an act of love. Each is an act of soulfulness. Each requires attention and time. Patience. I have done these chores repeatedly though my life, and yet, I haven’t really thought of myself as having a soul. It wasn’t that I thought I had no soul or was a soullless person. It was more that I thought of my soul the way I thought of, say, my small intestine. I knew I had one, but I didn’t really think about it while I was washing the dishes or tending to a conflict between my boys. I viewed  my soul in an abstract sense, but not in an immediate sense. It was something I thought about but not something I felt. On some level, I believed that caring for the soul was for people with time on their hands. It seemed too indulgent for a middle-class person who had real work to do.

The idea that I too could care for my own soul filled me with joy for much of the day. It was a sort of ephiphany that I can only compare to the one I had when I was eight or nine and looked into the mirror at myself and realized that in the same way I wanted to know what other people were thinking, other people were wondering the same thing about me. I look back at that moment as the one when I first recognized myself as bona fide person making her way in the world and not just a child or a fourth-grader or a girl. There are no fireworks in those moments, no surges of adrenaline. Rather, there is an opening. There is a sense of belonging, an abolishing of boundaries. A small soaring. Minor moments, significant only to ourselves.

It occurred to me that for months, if not years, I have been trying to make my life feel like my yoga class and I have been failing, in no small part, because I did not really acknowledge my soul. This is kind of like trying to run without using your feet. There is the me who goes to yoga class, wearing soft clothes and drinking mint tea and connecting to something deeper for about 90 minutes. And then there is the me who is home with two boys, drinking coffee and sweeping the floor and trying to resolve conflicts over trucks and toys and sippy cups while listening to the voice in my head that keeps telling me I need a break, that this is hard, that someday, I will take a vacation on the beach where I can drink cocktails and watch as many episodes of The Good Wife as I want to.

It never occurred to me that the yoga-going me and the toilet-cleaning me were the same person. Maybe the reason I was having such a hard time getting what I wanted – a life as blissful as a yoga class – was that on some level, I wasn’t giving myself permission to have it. Here I was, trying to reconcile two worlds, when what I was really doing was splitting my own whole life into pieces.

A soul, I thought lying in bed. What would it be like if I made my whole life – not just my yoga classes – into a soulful experience? It sounded decadent. Like eating chocolate for dinner.

When the boys woke, they tumbled into my bed like puppies. I have always loved this part of the morning, when I am overcome by their physical love for me and for each other. Usually, they end up bickering about who gets which side of the bed, and we get up and move onto something else. But on the Sunday I discovered my soul, Oliver asked Gus if he wanted to play in his room. “Gus, let’s go read on my top bunk,” he said, and Gus lit up and climbed his two-year old body over me. “Okay Awlver,” he said. “yet’s go.”

Suddenly I was alone. I had already showered and brushed my teeth. I actually had time to make coffee (because as it turns out, my soul likes coffee). I went downstairs and turned on NPR (which I can only do now on Sundays as they give the daily death toll a rest) and it just so happened that Jon Kabat – Zinn was giving an interview on Mindfulness. I made my coffee and listened to the quiet sounds of the boys. I listened to Jon Kabat-Zinn. I listened to my soul happily humming. I wondered if I still wanted to take a long vacation on the beach, where I could drink cocktails and escape my own life. I decided that I didn’t. It turns out that my soul likes what it is doing. It likes the work of mothering, of resolving conflicts and making snacks. It likes the small tasks of sweeping and scrubbing and mopping. It likes cooking and caring and all of the jobs my brain thinks are monotonous. Here, I had thought I was listening to my heart, but really I had only been listening to my mind.

There are still so many things I want:  to do Pincha Mayarasana in the middle of the room and not crash over, to have more time to myself, to have the boys not grab things from each other and then yell about it, to look like one of those girls in the Title Nine catalog, to not live in Washington, DC. But it turns out that I have everything I need. My soul is happy.

You are currently reading Soulfulness at Walking on My Hands.