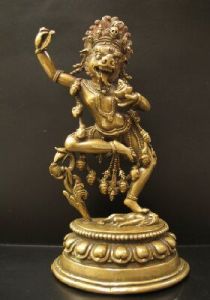 In the beginning of winter, I wrote about darkness, how it scares me. This year, I decided, instead of hiding out from winter and merely enduring it and waiting (desperately) for spring, I would embrace the darkness, the cold, the short days and long nights. This applied to myself as well. Since I can remember, I have always had shadows lurking at the corners of my life, things I didn’t want to deal with, demons that made me cover my eyes as soon as they appeared, that made me walk too quickly past the corners they were peeking from. This December, I decided I would deal with their darkness too. Come on Demon Children, I implored. Bring it!

Well, here’s what happens when you invite in your monsters: they show up in about a nanosecond. They have a big ol’ party in your head. They trash the joint.

“Be patient with all that is unresolved in your heart,” writes Rilke, “And try to love the questions themselves.” This is more difficult than it sounds. Unlike the patent leather sheen of New Year’s Resolutions, all of this unresolution, to me, is as dirty as old snow. For the past two weeks, I have been trying to write about my monsters and demons and unresolutions. I have been blogging about them (and then deleting the posts) almost every day. Mostly, I have been writing about the hard time I have with being a Navy Wife. Basically, I am about as anti-war as it comes, and yet, my housing and food and life are pretty much paid for by the military. It poses a moral dilemma at times for me. Additionally, many roles of the Navy Wife are at odds with the feminist upbringing I had in the late 70’s. But I am digressing. You can read all of this in the posts I deleted. I trashed them because every one sounded like a big bitch fest. Finally, I put down my laptop. I stepped away from the computer. I didn’t need to send all that garbage out into the universe. Instead, I realized, I needed to dust off my meditation cushion, sit my ass down, and deal with the mosh pit inside my head.

I have to say, the first session was pretty tame. I lasted maybe nine minutes, but it was peaceful. It was quiet and still, with the exception of Oliver calling from his room occasionally, “Mommy, is quiet time over yet? Is is thirty minutes now?” I felt sadness and more than a little fear but it was manageable. Still, I had the feeling that I didn’t really know what I was doing, that I was doing it wrong, which is kind of my own special mantra. Then, the other night in yoga I heard two guys talking about a meditation class. “Dude, are you going to the realm of the Dharmakaya?” was what one asked. “Count on it,” said the other. “How is that class?” I asked. “Awesome,” said the guy named Marcus. “You should check it out.”

Because my intention for this year is to experience more pleasure, I thought maybe I would. It sounded nice: a class to teach me how to meditate. Maybe it would even have a chapter on how to evict monsters. This isn’t something I would normally do because I already have so much to do. (Make sure we have a family dinner! Clean up! Be there for the boys at night!)  It seemed too decadent to leave the house tonight (on a Sunday!!) at 6 pm, but I did it anyway. I drove away from the mess of dinner and two little guys with cabin fever and drove off with my buckwheat-filled meditation cushion. Pleasures!!!

At the yoga studio, the check-in desk is usually manned by thin, lovely yoga teachers with long hair. Tonight, a heavier woman sat at the desk wearing a sky colored cable-knit sweater and black pants. She looked like the mother of a yoga teacher, like someone who shopped at Talbots rather than Lulumon. “Hey,” she said when I told her my name. “You brought your own cushion! Great!”  No, I thought. She’s the teacher?

When Mimi walked into the room, all 17 of us were arranged in a lopsided circle on blankets and blocks. Mimi put her hands on her hips and stared at two people in the back. “Ha!,” she said. “You thought you were sitting in the back.” She turned to the front of the room. “You,” she said, “Marcus, you get into the center.” Marcus looked at her. “I’m underdressed,” he said. “If I had known I was going to be in the center of the Dharmakaya, I would have worn a collared shirt.” Mimi laughed again. “Too bad,” she said. “Now move.”

What happened next was strange. She formed Marcus’ group into a tiny square with one person making each side and then arranged all of us around this little box. As we moved closer together in this strange formation, I began to feel safe. Cozy. Mimi told one of the women – a yoga teacher – to stand up and look at the shape we made. The yoga teacher paused and looked a little surprised. “It’s an eight-pointed star.” Mimi nodded. “I just formed you all into a yantra. Google that word when you go home. Yantra means sacred shape.” Sacred shape. I loved it. I loved that together – most of us strangers – our bodies made a sacred shape. I wanted my family to be a yantra. Maybe I even wanted my life to be a yantra too.

I have never meditated like that before. It felt magical. It felt like time travel and a little like flying. I was so busy breathing that I even forgot to tell myself I was doing it wrong. But even better was this sense of safety I felt. Since I moved to DC I have only felt aggression. I have only felt a vague and nameless hostility. Tonight in that tiny little room, I felt warm. I felt safe. I felt cozy, somehow sheltered by Mimi’s voice and those great spirits from the Dharmakaya. I felt like I haven’t felt since we left Ventura. Relief, sweet relief flooded me. The monsters even took a break and stepped outside for a smoke.

The final part of the meditation may have been my favorite though. Mimi told us we were going to do a hand-clapping practice of the Lion-Faced Dakini. What? I know. Bizarre, right? But here’s the thing. This Dakini is like the bad-ass of the deity bunch. She’s got your back. According to Tibetan Buddhist tradition, she clears obstacles of the most pervasive and malignant kind. She is regarded as the wrathful manifestation of Guru Rinpoche. To me, she looked a little like Pink. We were going to call on her and our manta went something like this:

By the blessings of the Great Truth
May all curses, sorcery, black magic and so forth,
And hateful enemies be reversed! (Here we all clapped a big thundering clap)
May all negativities be sent back to the harmful maras! (clap)
Completely reversed with no trace remaining! (clap)
By the strength of this wrathful female’s awareness mantra,
May the maras that cause obstacles to the accomplishment of awakening
And all harm doers without exception be annihilated,
And may all intentions be achieved as though wish-fulfilling.
I love that mantra. It made me feel like a superhero, especially the part about “black magic and so forth” and reversing the harmful maras. I thought of Wonder Woman in her  bodysuit holding up her palms and sending those lightning bolts right back to the villains. Annihilated. Take that! Shazam!

That lion-faced dakini is no joke. She made me feel safe and powerful at the same time. Or maybe that was Mimi or the energy in the room, or whatever happens when we all make a sacred shape together. Whatever is was, I am hooked. I’m going back for more.

You are currently reading Unresolution at Walking on My Hands.